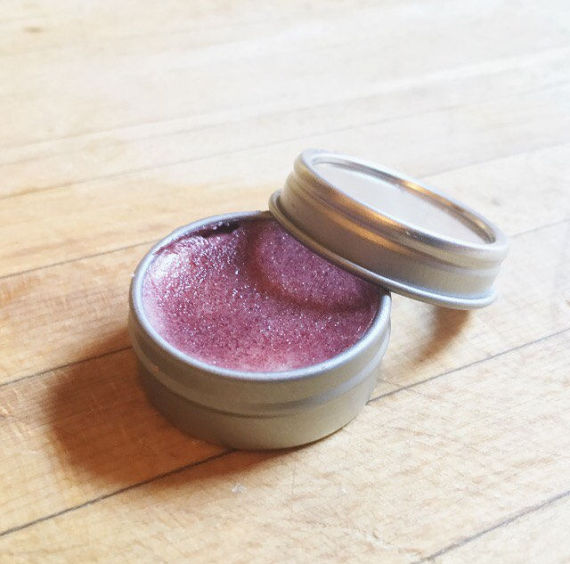 Now in the SHOP: A long lasting, smooth and silky Lip Gloss. Made of 100% pure, natural and organic ingredients. Packaged in a perfectly pocket sized 0.25oz tin with clear lid.

Tint
Available in Un-tinted, Hibiscus (for a faint berry tint, shown above), or Beet Root (for a faint reddish tint).

Scent
A subtly seductive and oh so kissable blend of pure Vanilla and Cinnamon essential oils.

Recipe
Each order includes your very own DIY recipe to recreate this product at home.

Recycle & Reuse
Each order also includes simple instructions for mailing back your empty tin for a discount on your next order.

Happy Homesteader
Why the recipe and recycling program? We are dedicated to encouraging sustainable, simple living and a can do spirit. We want you to make do with less and enjoy it!

Get yours today in the SHOP! 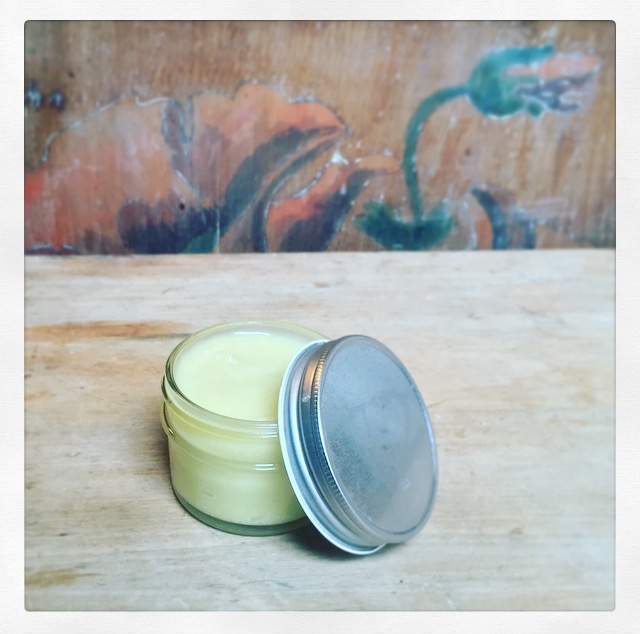 This smooth 100% Natural deodorant is effective, cheap, and easy to make. Some homemade deodorants use Baking Soda, which I found to be irritating to my skin. The arrowroot which has natural drying properties (I use it on it’s own for a Dry Shampoo), works very well on it’s own here.

Don’t be afraid to get creative and experiment with ingredients and scents. This is my personal blend and I love it!

Ingredients: use only pure, organic, 100% natural products. I buy mine in bulk.

This recipe will make enough to fill a 2oz glass jar. I like this size for home and make 1oz jars to travel with. You will find that a little goes a long way.

While it will cool to a soft solid, it is not intended to be used in a stick applicator. Use a dab on your finger straight from the jar.

Note: Quickly clean off pots and spoon with soap and hot water. Because I make oil/wax based products regularly, I have a devoted set of simple cookware: 2 small pots to make a double boiler, a metal tea spoon, a set of metal measuring spoons, and a scrubber to clean up with.

I recently started using a bar shampoo to do away with the plastic bottle of a modern liquid shampoo. Bar soaps cost around $5 and last up to 24 shampoos (the same as a liquid brand) and are packaged if at all, in a simple paper wrapper. An environmental, economical, and aesthetic no brainer.

J.S Liggett’s old fashioned shampoo bar, is a brand carried by my local green market and have been really happy with it. There are a ton of brands out there, and there are also a number of forums dedicated to the waxy residue left from some of these. I haven’t had any issues with this one at all. 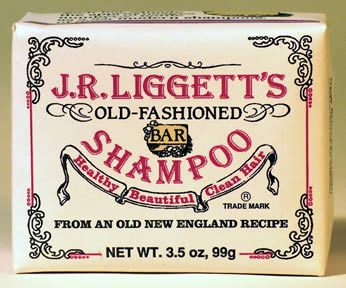 The formula for this incredible and unique bar of shampoo was discovered loosely placed in an old New England Cookbook many years ago by J.R.LIGGETT. Its 100% vegetable oil formulation lathers quickly, cleans well, and rinses out and easily, leaving you with healthy, beautiful, and clean hair. It will not strip the natural oils from your hair (there are no detergents) for this reason most people do not need a conditioner! It just smells clean. Ingredients: Olive oil, coconut oil, castor oil, fresh pure New Hampshire spring water, sodium hydroxide (a binder) and essential oils for fragrances. 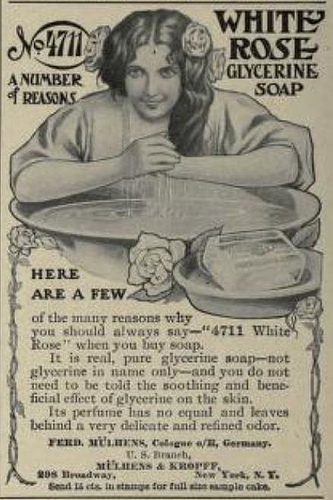 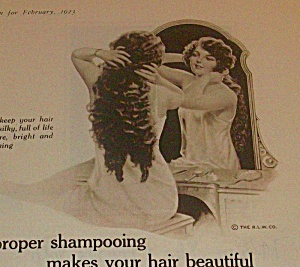 No Poo (no shampoo) movement theory:

Shampoo has only been used with fervor since the 1970s. Before then, either regular soap was used a few times a month or, just after the early 20th century, shampoo was used only a few times a year. It was in the 1970s that shampoo use became prevalent. Ads featuring Farrah Fawcett and Christie Brinkley asserted that it was unhealthy not to shampoo several times a week. This mindset is reinforced by the greasy feeling of the scalp after a day or two of not shampooing. Using shampoo every day removes sebum, the oil produced by the scalp. This causes the sebaceous glands to produce oil at a higher rate, to compensate for what is lost during shampooing. According to some dermatologists, a gradual reduction in shampoo use will cause the sebum glands to produce at a slower rate, resulting in less grease in the scalp. – Wikipedia 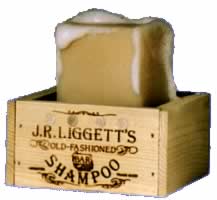 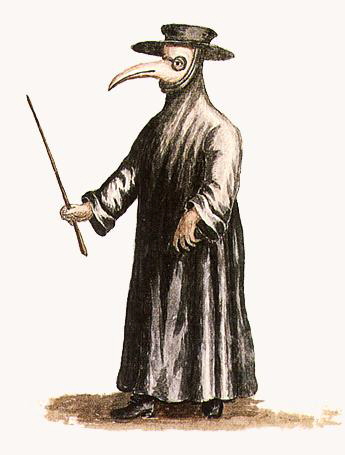 According to legend, a group of bandits, known only as   The Four Thieves, sacked the homes of the dying and the dead during the Plague of the Black Death.

Some say The Four Thieves were brothers, born to either a perfume maker or a midwife trained in herbal remedies. Either way, the thieves seem to have been able to come into direct contact with the incredible virulent and deadly infectious disease without contracting it.

At first the authorities ignored the thievery, sure that the thieves would quickly succumb to plague themselves and save the county the trouble of prosecuting them. When the robberies continued however the law stepped in. They were tried, found guilty and threatened with death if they did not supply the recipe for their elixir. The thieves complied, divulging their secret recipe. Following which, they were promptly hanged. 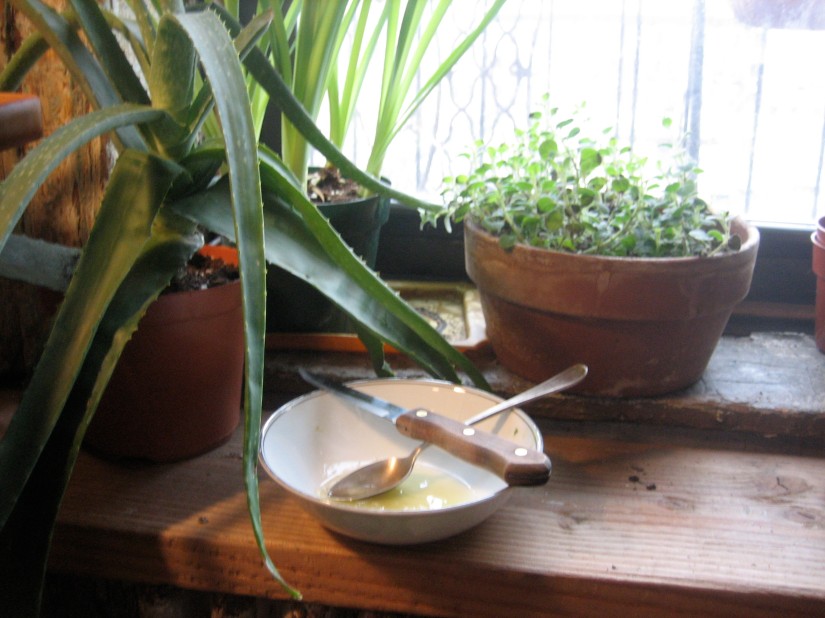 Not only criminals benefited from herbs to ward off disease. During the Black Death, “Plague Doctors” made house calls to the sick in order to verify whether or not a patient was infected. Their uniform was both bizarre yet practical. Wearing a squat black hat used to identify the doctor’s profession, atop a face covered by an elaborate bird’s beak mask filled with herbs and spices (much like the 4 thieves concoction), and eyes were set with glass, creating thick, protective thick goggles. The body was clothed in a long, floor length waxed coat over heavy leather britches. A sturdy pair of leather gloves and full length leather boots also protected the doctor from contact with his patients, as did a cane which was carried and used to poke at patients, while still maintaining a safe distance (could this be the origins of “I wouldn’t touch it with a 10 foot pole”).

Of course the most interesting part of this uniform is the strange bird mask. While it would have been fear inspiring enough to keep patients at a safe distance, it is not that different from modern doctor’s face masks, used to protect against airborne germs. Whether it was this, or the herbs themselves in the beak that proved most effective is unknown, if either. 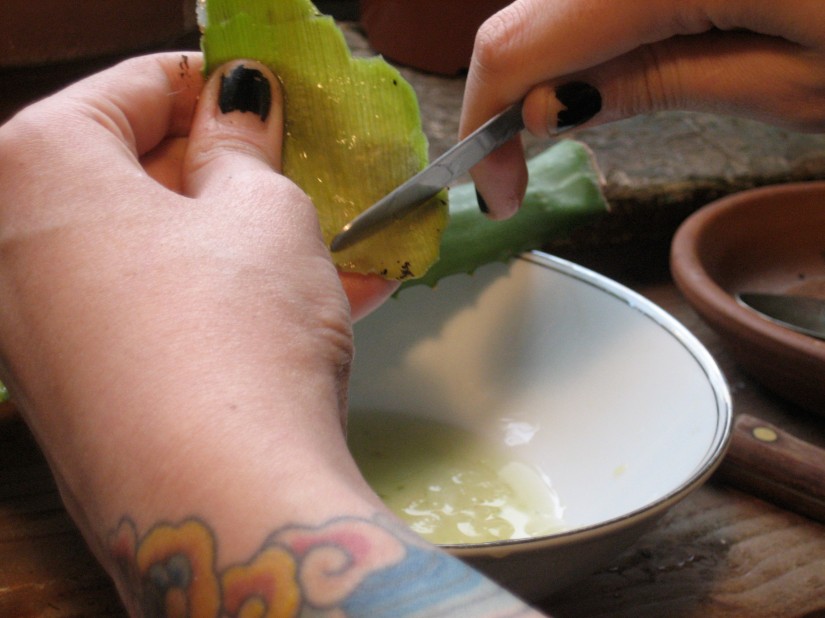 For hundreds of years after and reportedly still, variations on the Four Thieves vinegar has been used as a cure-all for the plague and other diseases. Although these accounts are impossible to verify, and the effectiveness of the specific herbs is unknown, the ingredients of this potion are all natural antibacterial, antiviral agents. Sources even note: “Nostradamus owned a perfume manufacturing enterprise, (meaning distillation of plants to make essential oils.) People who worked in these facilities did not succumb to the plague” 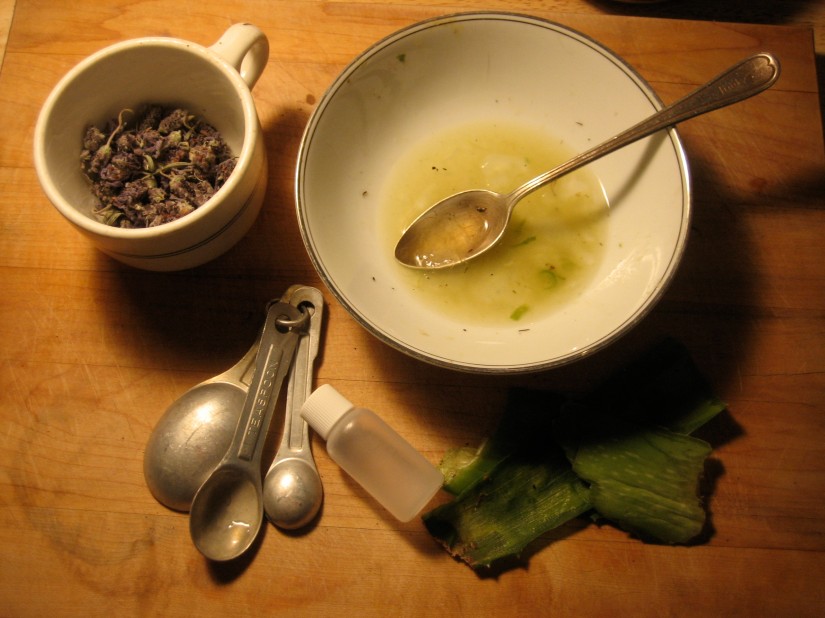 The original Four Thieves Vinegar is said to include: elecampane root, wormwood (the hallucinogenic ingredient of Absinthe, illegal in the U.S), Juniper berries, sage, and cloves. Other versions include, garlic, camphor and lavender. This and other variations can be found HERE. 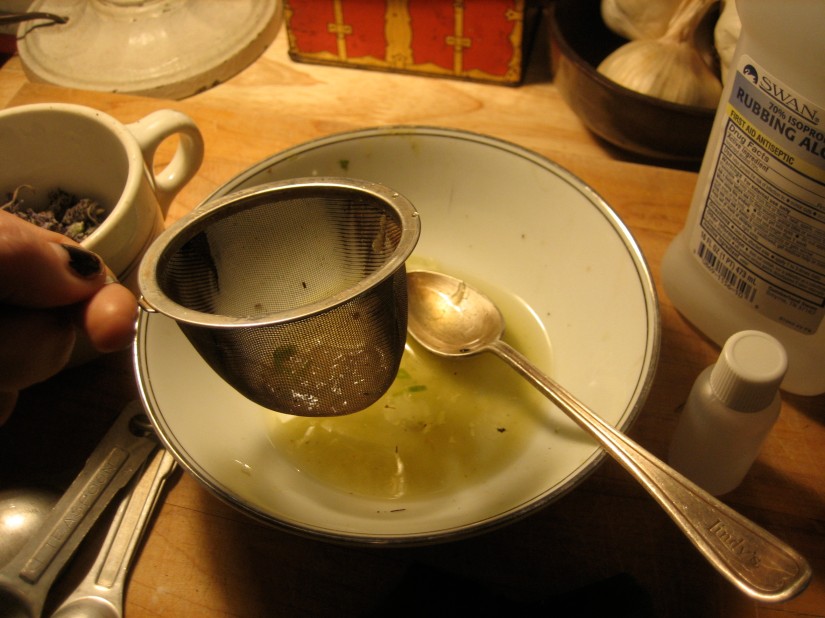 A note on Garlic:

As a child, an uncle of mine who lived in Mexico, got into a bar brawl and served several years in prison for manslaughter. While he was incarcerated, he took to eating raw garlic for it’s medicinal, immunity building properties. Eventually, the warden separated him from the other inmates, giving him his own cell. Apparently, his fellow inmates couldn’t stand the odor of garlic exuding his every pore. Because of this, I have eliminated garlic from my recipe. 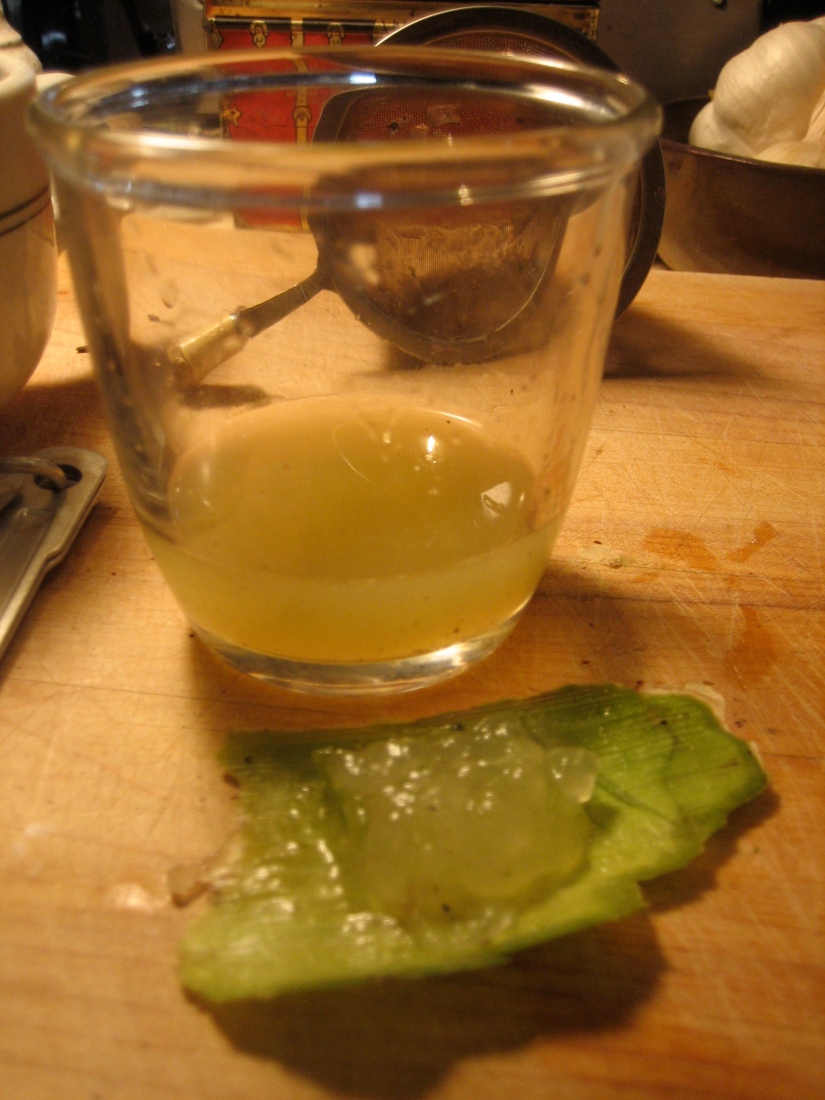 The recipe below seems to be a very practical recipe (due to the antibacterial, disinfectant properties of each herb), perfect for warding off the common cold. I recommend carrying a small spray bottle full of this mixture with you at all times as a natural antibacterial & disinfectant spray.

1. Combine all the ingredients and seal tightly in a glass jar. Place the jar in a warm, dark cupboard for four weeks, shaking occasionally.

2. After four weeks, strain the mixture, cut with equal parts water, and decant into a spray bottle. 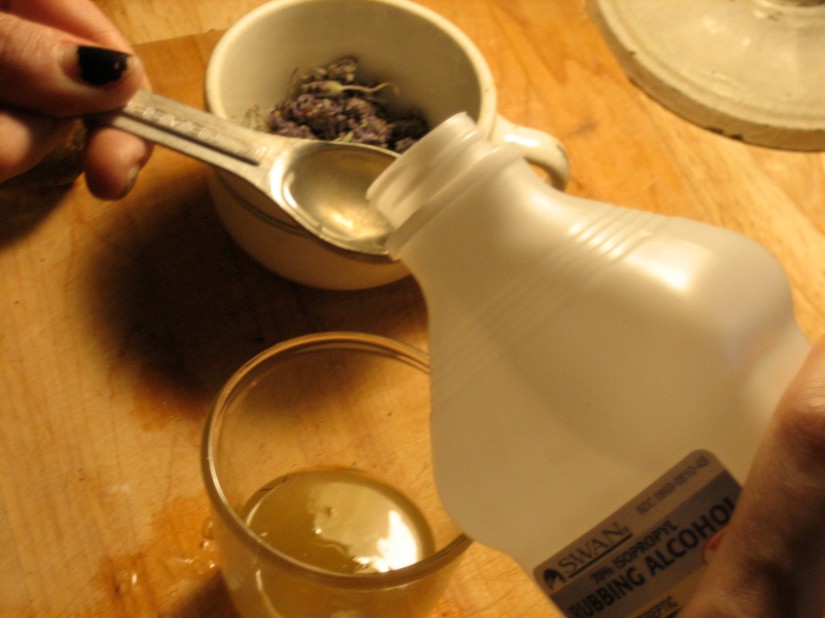 Special note: If you are using herbs fresh from your garden, triple the amount specified in the recipe.

Note: Im also curious if using the rubbing alcohol alone is what disinfects, regardless of the rest of the ingredients…My conclusion on this matter is that the aloe and herbs will stop your hands from drying out at the very least…

Note that homemade herbal antibacterial sprays are not registered disinfectants.